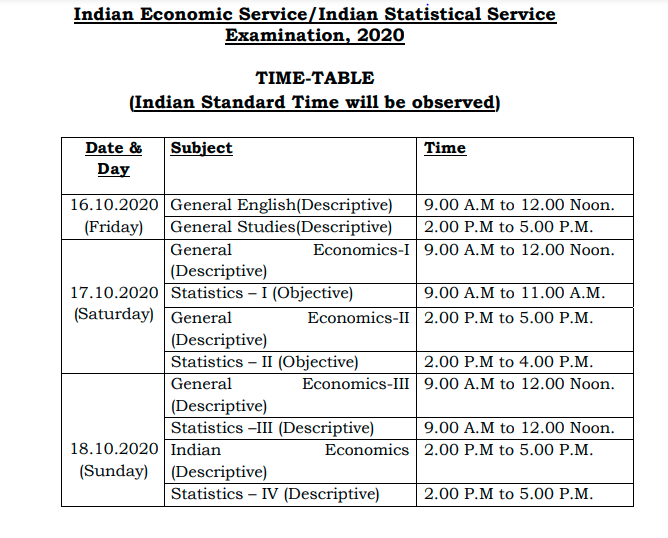 A candidate must be either:—

(c) a subject of Bhutan; or

(d) a Tibetan refugee who came over to India, before the 1st January 1962, with the intention of permanently settling in India; or

(e) a person of Indian origin who has migrated from Pakistan, Burma, Sri Lanka, East African countries of Kenya, Uganda, the United Republic of Tanzania, Zambia, Malawi, Zaire, and Ethiopia or Vietnam with the intention of permanently settling in India :

Provided that a candidate belonging to categories (b), (c), (d) & (e) above shall be a person in whose favor a certificate of eligibility has been issued by the Government of India.

A candidate in whose case a certificate of eligibility is necessary may be admitted to the examination but the offer of appointment may be given only after the necessary eligibility certificate has been issued to him/her by the Government of India.

The selection process of UPSC IES comprises two stages. The two stages are -

Note-1: Statistics I & II will be of Objective Type Questions (80 questions with maximum marks of 200 in each paper) to be attempted in 120 minutes.

Note-2: Statistics III and IV will be of Descriptive Type having Short Answer/ Small Problems Questions (50%) and Long Answer and Comprehension problem questions (50%). At least one Short Answer and One Long Answer Question from each section are compulsory. In Statistics-IV, an equal number of questions i.e. 50% weightage from all the sub-sections below, and candidates have to choose any two subsections and answer.

Note-3: The papers on General English and General Studies will be of subjective type.

Note-4: The details of the standard and syllabi for the examination are given in Section-II below.

The candidate will be interviewed by a Board of competent and unbiased observers who will have before them a record of his/her career. The object of the interview is to assess his/her suitability for the service for which he/she has competed. The interview is intended to supplement the written examination for testing the general and specialized knowledge and abilities of the candidate. The candidate will be expected to have taken an intelligent interest not only in his/her subjects of academic study but also in events which are happening around him/her both within and outside his/her own State or Country as well as in modern currents of thought and in new discoveries which should arouse the curiosity of well-educated youth.

The technique of the interview is not that of a strict cross-examination, but of a natural, though directed and purposive conversation intended to reveal the candidate's mental qualities and his/her grasp of problems. The Board will pay special attention to assess the intellectual curiosity, critical powers of assimilation, the balance of judgment and alertness of mind, the ability for social cohesion, the integrity of character initiative, and capacity for leadership.

The standard of papers in General English and General Studies will be such as may be expected of a graduate of an Indian University.

The standard of papers in the other subjects will be that of the Master’s degree examination of an Indian University in the relevant disciplines. The candidates will be expected to illustrate the theory by facts, and to analyze problems with the help of theory. They will be expected to be particularly conversant with Indian problems in the field(s) of Statistics.

Candidates will be required to write an essay in English. Other questions will be designed to test their understanding of English and workman-like use of words. Passages will usually be set for summary or precis.

General knowledge including knowledge of current events and of such matters of everyday observation and experience in their scientific aspects as may be expected of an educated person who has not made a special study of any scientific subject. The paper will also include questions on Indian Polity including the political system and the Constitution of India, History of India, and Geography of nature which a candidate should be able to answer without special study.

(b) Standard errors and large sample tests. Sampling distributions of x,s2, t, chi-square, and F; tests of significance based on them, Small sample tests.

Finite differences of different orders: , E and D operators, factorial representation of a polynomial, separation of symbols, sub-division of intervals, differences of zero.

Summation of Series: Whose general term (i) is the first difference of a function (ii) is in geometric progression.

Concept of multistage sampling and its application, two-stage sampling with an equal number of second stage units, estimation of population mean, and total.Double sampling in ratio and regression methods of estimation.

Discussion (without proof) of estimation of mean, autocovariance, and autocorrelation functions under large sample theory, estimation of ARIMA model parameters. Spectral analysis of the weakly stationary process, periodogram and correlogram analyses, computations based on Fourier transform.

(Equal number of questions i.e. 50% weightage from all the subsections below and candidates have to choose any two subsections and answer)

(i) Operations Research and Reliability:

Definition and Scope of Operations Research: phases in Operation Research, models and their solutions, decision-making under uncertainty and risk, use of different criteria, sensitivity analysis.

Transportation and assignment problems. Bellman’s principle of optimality, general formulation, computational methods, and application of dynamic programming to LPP. Decision-making in the face of competition, two-person games, pure and mixed strategies, the existence of solution and uniqueness of value in zero-sum games, finding solutions in 2x2, 2xm, and mxn games.

Notions of aging – IFR, IFRA, NBU, DMRL, and NBUE classes and their duals. Loss of memory property of the exponential distribution.

Reliability estimation based on failure times in variously censored life-tests and in tests with the replacement of failed items. Stress-strength reliability and its estimation.

Estimation of survival function – actuarial estimator, Kaplan – Meier estimator, estimation under the assumption of IFR/DFR, tests of exponentiality against non-parametric classes, total time on the test.

Semi-parametric regression for failure rate – Cox’s proportional hazards model with one and several covariates, rank test for the regression coefficient.

Competing risk model, parametric and non-parametric inference for this model.

Reporting and analysis: analysis of categorical outcomes from Phase I – III trials, analysis of survival data from clinical trials.

(vi) Design and Analysis of Experiments:

(vii) Computing with C and R :

Files in C: Defining and opening a file, input-output operation on a file, creating a file, reading a file. Statistics Methods and techniques in R.

The candidates should note that no request for change of center will be entertained. All the examination centers for the examination will cater to the examination for Persons with Benchmark Disabilities also. Candidates check the list of exam centers given in the table below:

As we all know that the salary differs from the designation and posting. The in-hand salary of a Statistical Service officer is INR 59,750 - 56,100 per month. Here is a tabular for detailed salary structure as per the designation of the officers:

The Economic Service officers / Statistical Officers along with a handsome salary will be able to exercise the below-mentioned allowances: