Various Branches in Indian Navy can broadly be classified into four categories.:-

Recruitment of sailors in the Navy is application based and is carried out on the All India Merit on the basis of a Written Examination, Physical Fitness Test and Medical Examination.

Sailors are the sepoys of the Indian Navy who are responsible for operating and maintaining propulsion machinery, weapons, sensors etc. Sailors in the Navy are imparted with requisite training at various intervals during their service. They are liable to serve anywhere in India, onboard ships and Submarines or abroad as deemed necessary by the service.

Less Height. Minimum height permitted to a candidate for enrolment in the Navy is 157 cms. Tribal Candidates who pass written exam and PFT are to be granted relaxation in height as follows:

Another medical standard for Navy Sailor:

Must pass the CPII colour perception standard and Eyes Visual standards and meet the following standards:

PAY OF RECRUITS DURING TRAINING:

All recruits shall receive a stipend during their training period at the rate of Rs. 5700 per month. On successful completion of training Grade Pay, Military Service Pay, Group 'X' pay (if applicable), Dearness Allowance and allowances of the trade to which they stand allotted less the stipend already paid. The rate of the stipend will be increased by 50% every time the DA payable on revised pay band goes up by 50%.

All the sailors have been divided into two groups viz 'X' and 'Y'. Artificer Apprentices fall under 'X' group and rest of the sailors in group 'Y'. Pay scales in respect of sailors as per NI 1/S/08 are as follows:- 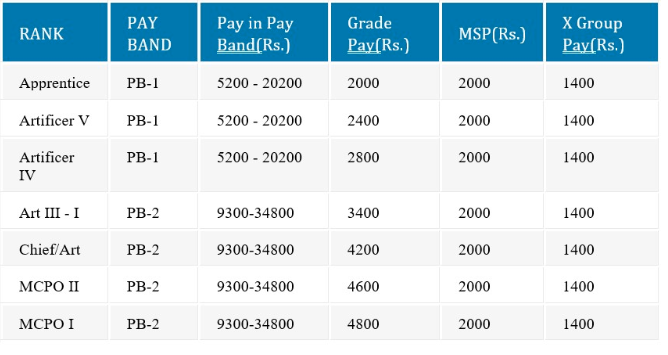 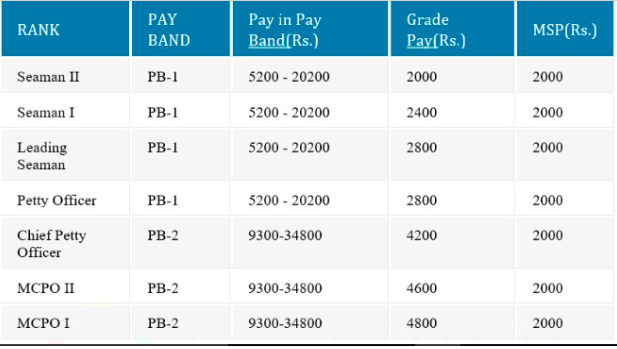 Promotion prospects exist up to the rank of Master Chief Petty Officer-I, i.e. Level 8 of the Defence Pay Matrix (Rs 47,600- Rs 1,51,100) plus MSP @ Rs 5200/-per month plus DA (as applicable). Opportunities for promotion to commissioned officer also exist for those who perform well and qualify the prescribed examinations.